Sunday 24 April 2016: let’s step back just over 12 months: “He’s sent us vouchers for a helicopter trip!”. The facial expression said it all – I think she nearly took flight there and then… With a busy summer ahead and lots of unknowns, we didn’t get round to redeeming them until the autumn. The first booking was cancelled due to the weather – as was the second, and the third, and… (it’s reassuring really). Eventually, we made it, and with plenty of time to get used to the idea, “we” were quite looking forward to the flight. “Is that it? It’s tiny!”. Yes, a very modern-looking (I’m no expert) little four-seater job – driver and three passengers.

We’re flying from Halfpenny Green – “Wolverhampton Airport”, though its WW2 origins are still pretty obvious. We’re strapped in (car-type seat belts) in minutes and away – and despite the clattering of rotor blades while we waited to board, it’s quiet and peaceful (thanks partly to the headphones, I guess) – a very relaxing way to travel over the Shropshire countryside, bobbing and swaying gently in the breeze, with little sense of forward motion. First we’re heading for Bridgnorth, then turning to fly above the Severn, passing Stanley Hall, the fishing lakes at The Boldings and Apley Hall. Soon Broseley is over to our left, and in moments we’re above Ironbridge. As we pass the power station, we begin to turn back, viewing the huge bends upstream in the Severn before buzzing Benthall Hall and skirting Broseley again. Staying west of the river, we’re soon looking down on Bridgnorth, then Chelmarsh reservoir and, crossing the river, Dudmaston Hall. Not far to go now – losing height again to make a gentle landing back at Halfpenny Green. What a great trip! Many, many thanks, T. “When can we go again?” ‘Nuff said! 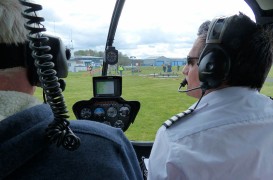 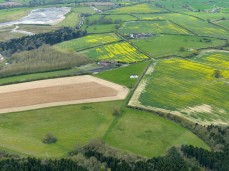