Shropshire is well-known for its role in the industrial revolution, with the iron bridge at – er – Ironbridge being both world-renowned and a very popular venue for tourists and others. That bridge was built in 1779, the first iron bridge in the world. Seventeen years later, Thomas Telford completed what is now the oldest iron aqueduct in the world (a much smaller aqueduct, completed just a month earlier on for the Derby canal, no longer exists). The aqueduct at Longden-on-Tern carried the Shrewsbury canal over the river Tern. It continues to cross the Tern to this day, though the canal is long-gone, and is both a scheduled ancient monument and a grade I listed building. Shame to say that, though we’ve lived in this area for more than 40 years, and driven past many times, we’d never taken a closer look. Until last Sunday, that is, killing time before seeing the Duchess (previous post – yes, we’re out of sync again…). Unlike Ironbridge, we were alone. 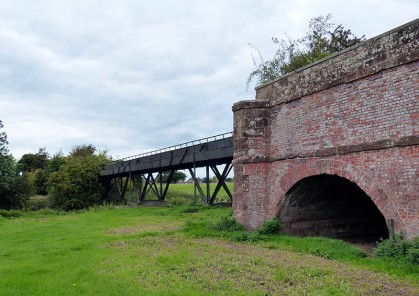 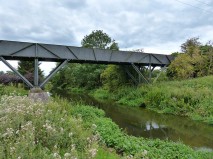 …over the river Tern

Boatman’s view of the Tern 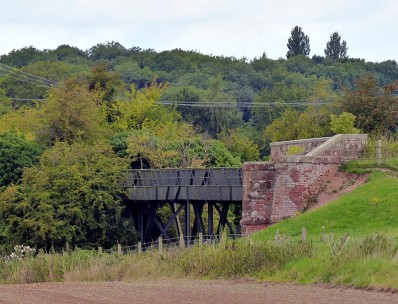 Last look, back across the fields