Tuesday: A friend had managed to obtain vouchers for £10 day rovers on the Northern Rail network – would I care to join him? No arm-twisting required there… The most convenient starting point is Crewe, where we’re off on the 9.34am to Manchester, via the airport. From Manchester we’ll take a ride through the Hope Valley to Sheffield. Our route and schedule is determined by the nature of Northern Rail’s services – they tend to operate the “stoppers” – so we can’t take the Crewe – Stockport – Sheffield route, instead, we’re heading out on the old GCR/MR joint lines through Romiley and Marple, joining the Midland line proper at New Mills.

At Sheffield, we’ve a longish wait for the Huddersfield train – or we can join a Nottingham – Leeds service, and change at Barnsley. We’ve been on Midland metals from New Mills, but at Barnsley, we’re back on the GCR as far as Penistone, along a line which lost its passenger service in 1959, and regained it in 1983 when the direct Sheffield – Penistone line closed. It’s interesting new track, especially the section from Penistone to Huddersfield, which is really up in the hills.

Only minutes after arriving at Huddersfield, we’re off again, to Leeds (LNWR), where we’re straight onto a modern electric unit for Bradford Forster Square (Midland again; the station almost totally unrecognisable from my last visit in the late ’80s). We’d toyed with the idea of a trip to Ilkley, but the times would have been very tight, and it might have meant a late return home – another day, perhaps. A leg stretch now – we need to get to Bradford Interchange, where there’s just time to grab a bite to eat before setting forth for Manchester, via the L&Y Calder Valley route through Hebden Bridge. Another leg stretch through central Manchester to Piccadilly, where we’ve a longish wait (lots of trains to Crewe, but our ticket’s not valid for Virgins or Arrivas…), this time travelling direct through Stockport. Eventually we’re back to our starting point, after an interesting tour on northern rails… (Will the offer be repeated? Fingers crossed – and many thanks again, J) 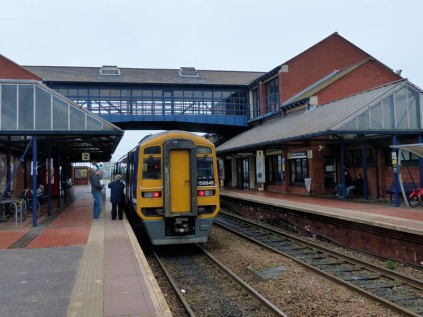 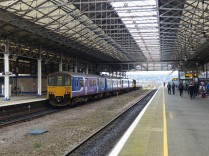 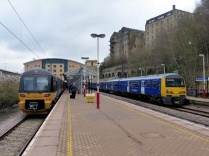 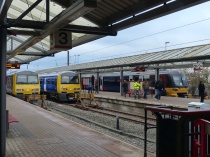 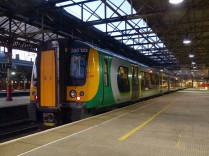 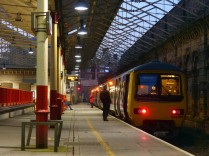