We’re on the western fringe of Shropshire today, in a part of the county where the distant past has some significance. Mitchell’s Fold stone circle is a well-known ancient monument, whose location on this high grassy ridge makes up for a lack of stature – it’s not Stonehenge. Walking on, we arrive at Castle Ring (a pretty straightforward name for a hill fort) – again, not the biggest in these parts, but its situation is dramatic. We take a detour on the way there, to visit the top of Rorrington Hill. No cairn or OS column – the highest point must be found by guesswork. Eventually, we come to Bromlow Callow. I’ve no idea what its history might be, but the round hill topped by a clump of tall trees makes it a distinctive landmark in these parts. The view would be tremendous on a clearer day – it’s hazy again, and we can only just make out the Long Mountain (it may be long, but it’s hardly a mountain) barely five miles away. Our return takes us to the highest point of Stapeley Hill – again, it’s not a mountain, but at least its highest points are marked by rocks and cairns. We could have had better views today, though we did see a hare – he must have been just a few yards away when we startled him. With sunshine and light winds, it’s been another great day out on the hills. 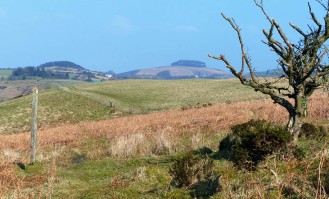 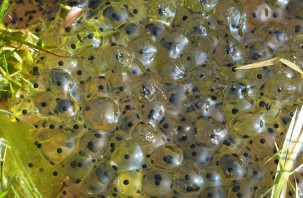 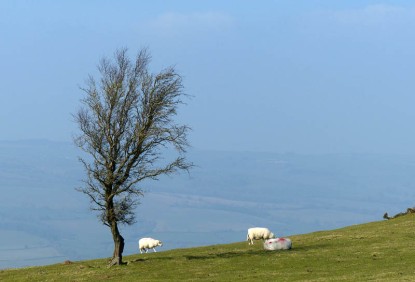 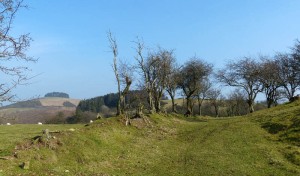