…and a great day out!

The journey to Llandudno was a chapter of accidents (not literally). Bitter cold and a hard frost at home (scrape scrape), almost forgot to put my boots on, thought I’d miss the train (road works and heavy traffic), but actually managed to catch the earlier (9.00am) train. Congratulated myself on that – the 9.06am was running ten minutes late, and I’d have missed the connection at Shrewsbury. Except that the Cardiff – Holyhead train was ten minutes late too. It stopped for several minutes just after leaving Wrexham, and the driver eventually admitted that he didn’t know what the problem was, but our train was now so late that it would be terminating at Chester. He helpfully gave us the times of connecting trains there – the first being the 11.00am Manchester – Holyhead. We eventually made it (35 minutes late now) to Chester with five minutes to spare. The 11.00am was a loco-hauled train – comfortable, spacious, quiet and smooth – wonderful. I began to think I should have chosen Holyhead as today’s destination.

On arrival at Llandudno Junction, my plans went further astray. There would be no train to Llandudno for three quarters of an hour. I eventually discovered the bus stop – the timetable said I’d just missed one (and the next wouldn’t be for ages) – and then it arrived, three minutes late. Hadn’t expected to arrive at my destination by bus, but I got there.

The purpose of the trip was a walk around the Great Orme, that huge block of limestone jutting into the Irish Sea to the north-west of the town. I started out on the road by the pier, but it would be in deep shade (and very cold!), so followed a path up to the sunlit plateau. It’s a popular spot, especially with the dog-walkers, but there’s plenty of space up here, with interesting coastal scenery, some attractive limestone outcrops and cliffs, and extensive views. It’s a perfect day for it too – bright sunshine and a clear blue sky. The time went by all too quickly, and I was soon back at the railway station, for a return journey that was, in complete contrast to the outward run, flawless. 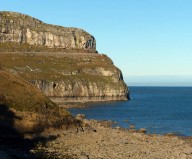 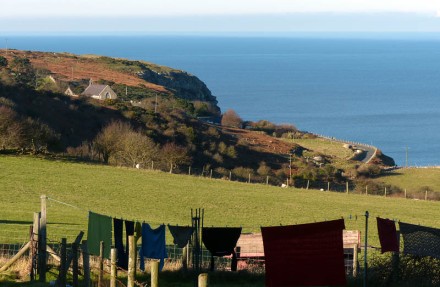 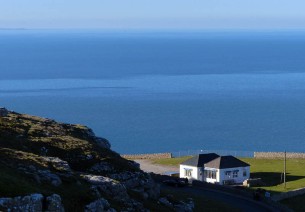 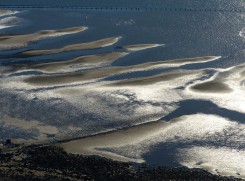 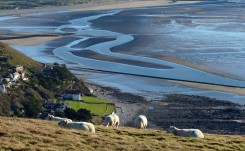